The Zoom H3-VR audio recorder bundle is the complete solution for capturing and processing spatial audio for VR, AR and mixed-reality content. With a built-in Ambisonic mic, recorder and decoder, the H3-VR puts 360-audio in the palm of your hand. While the recorder comes with a foam windscreen, the addition of the MOVO furry windscreen is perfect for anyone planning on recording outside. Since the H3-VR records directly to an SD card, this bundle includes a 32GB memory card to get you started out of the box.

In the past, capturing VR audio required a dedicated Ambisonic mic, a separate recorder and a computer for encoding the audio from raw Ambisonics A format to VR-ready Ambisonics B format. Now, with the H3-VR, all of the encoding and decoding is done on board, saving time, money and effort at every step.

Audio For Every Reality

Ambisonics Audio for VR
The H3-VR’s 4-capsule Ambisonic mic captures precise 360-degree VR audio recordings up to 24 bit/96 kHz. And without ever connecting to a computer, the onboard decoder allows you to export Ambisonics B-format files directly.

Standard Stereo
The H3-VR even offers standard stereo recording for recordings that will be played out of speakers rather than headphones.

5.1ch Surround for Video
Free to download, ZOOM Ambisonics Player software can easily convert Ambisonics audio to a 5.1ch surround file that is pre-aligned to the proper speakers, and is exported to your video or audio editor for syncing with standard video.

Live Streaming 360
The H3-VR also enables you to live stream events in 360 degrees so that wherever your fans are, they’ll have access to the best seats in the house.

Fits Anywhere. Captures Everything. The H3-VR’s compact, conical design captures audio from multiple angles without getting in the way of the camera or the action.Auto Mic Position and Level Detection make placing the H3-VR simple. Whether positioned upright, upside down, endfire or endfire inverted, the H3-VR automatically calibrates so your audio and video are already aligned for post.

The slam of dungeon doors, growl of monsters or howl of the wind can make or break a player’s fantasy. With the ability to capture high-quality in-game audio, you can elevate your player’s experience to new levels.

Monitoring & Playback
Monitor your audio live in stereo binaural or use the H3-VR’s onboard Ambisonics Decoding to simulate your recorded 360-experience during playback.

Streaming and More
Perfect for live streaming, video conferencing, direct recording and more, the H3-VR’s audio interface mode turns it into a USB 360 mic for your computer or stereo mic for your iOS device.

360º Post-Production Made Easy
The H3-VR’s companion ZOOM Ambisonics Player software takes the work out of post-production by easily converting your Ambisonics files to Stereo, Binaural, 5.1ch surround and more. Play, trim, re-orientate and export your audio files in minutes. 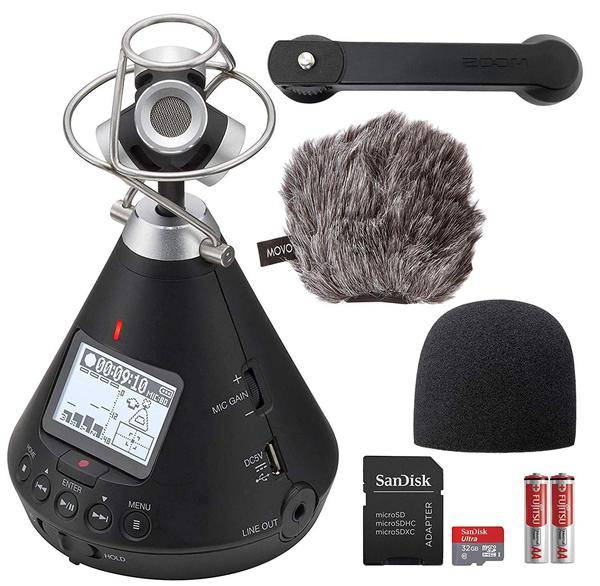