The Movo MTP2000 is a portable turntable that provides an ideal solution for creating time lapse videos or panoramic stills with GoPro/action camera, smart phones and cameras up to 2kg.

It includes a 1/4"-20 camera screw on top and a 3/8" to 1/4"-20 socket at the bottom for a tripod attachment - although and it can also be used directly on a tabletop or other ﬂat surface. Based on a simple, non-electric timer mechanism (no batteries necessary), the MTP2000 is capable of panning 360° counterclockwise in 120 minutes.

For clockwise panning, hang the MTP2000 upside down - although this is only recommended for GoPro/action camera, smart phones or cameras weighing less than 1 lb. The minimal interface allows the tripod head to be set and used quickly, as well as allowing for a second tripod head to be mounted on top to double the speed of the cycle - a complete revolution in 60 minutes. 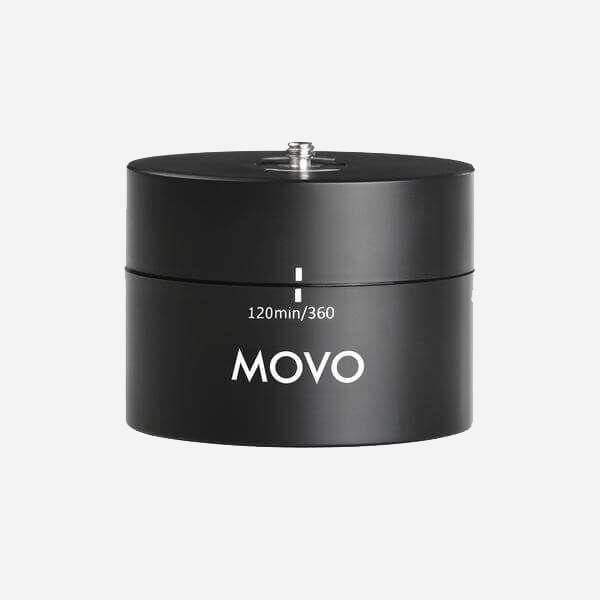 Capturing time lapse footage can be tricky without the proper equipment, especially once you throw rotation into the mix. Having a smooth and steady rotation is key, as any change to the speed of the rotation or slight bump will stand out in the final footage. Accomplishing this by hand and having quality footage is next to impossible. Enter, the MTP 1000 and the MTP 2000 from Movo. These are two motorized time lapse tripod mounts that you can use with smartphones, DSLR’s, and small camcorders up to 2kg. These MTP’s will allow you to quickly setup your shot and capture quality footage that you can use for time lapse.

Both the MTP 1000 and 2000 function the same, with the exception of the speed at which the devices rotate. The MTP 1000 can rotate 360 degrees in 60 minutes and the MTP 2000 can rotate 360 degrees in 120 minutes. Essentially, the MTP 1000 is rotating 1 degree every 90 seconds and the MTP 2000 is rotating 1 degree every 3 minutes (180 seconds). The reason this is important is shots often times require a specific field of view to be captured in a certain time frame. For example, if you are trying to capture a 90 degree rotation over the course of 30 minutes, you would want to use the MTP 2000. If you wanted a faster rotation, you could use the MTP 1000 to capture the same 90 degrees in 15 minutes.

You also want to consider the final video and the rate you will be retiming the time lapse on you video editing software or app. Without getting too deep into a complex math problem, simply ask yourself how long you want the final clip to be. If I take the example above and speed up that footage 30x, that will give me a final clip that is 30 seconds with the MTP 1000 or 60 seconds with the MTP 2000 for the same 90 degree rotation. While you can change the retime speed, that can also change the tone or feel of the clip. This is why I like having one of each, so I can be ready for multiple scenarios. A pro tip for achieving a faster rotation is to stack the MTP1000 on top of the MTP 2000, or stack two MTP 1000’s for an even faster rotation.

On both devices, there are easy to see markings at 90, 180, 270, and 360 degrees that help you set the correct field of view that want to capture. Simply mount your camera to the MTP and rotate the device to the desired degrees. These can be mounted on a standard tripod with the 1/4 inch thread as well as tripods with a 3/8 inch screw. In the box, you also get a smartphone mount and action cam mount for easy use with either of those devices. Whether you are using the MTP 1000 or the MTP 2000, you are sure to get steady smooth footage. As with all your equipment, just make sure to practice ahead of time and play around. You never know what trick you might learn to capture footage that has the look and feel that you are aiming for.

This was an amazing addition to my tool bag for sure! Captured great footage from the time it arrived.

This little thing works like a charm. Don't expect a Ferrari. This is a Honda and it keeps performing and performing reliably. Buy one. Keep it in your kit bag. Don't overload it with weight. You won't be sorry.

I love shooting time lapses hands down you will not find a better one than this. I use it for my Galaxy S10+ and have posted my videos everywhere. The complements I get are so amazing. This is a must have tool in your bag.